CIBC vs. RBC 2021: Which Major Canadian Bank is Better?

No matter where you find yourself between Canadian coasts, you’re bound to see a CIBC or an RBC branch.

After all, they’re two of Canada’s “Big Five” banks (the others are Scotiabank, TD, and BMO).

However, in this article, we’re focusing on CIBC and RBC by providing a comparison for two of Canada’s largest and most reputable banking institutions. But which one provides the better banking experience for the average Canadian?

CIBC vs. RBC: At a Glance

The Canada Imperial Bank of Commerce (CIBC) and Royal Bank of Canada (RBC) have deep roots in the Canadian banking landscape.

CIBC operated for almost 60 years after two Canadian banks merged. Those two banks were the Canadian Bank of Commerce (founded 1867) and the Canadian Imperial Bank (founded 1873). Today, CIBC is one of Canada’s most reputable banking institutions and offers an exceptional direct-to-consumer digital bank known as Simplii Financial, which touts a no-frills, cost-free banking experience. Today, CIBC has over 10 million clients.

The Royal Bank of Canada (RBC) has operated in Canada since 1864, founded first in Nova Scotia. Since then, it’s expanded worldwide and currently services 16 million clients in Canada, the United States, the Caribbean, Europe, and Asia.

Both CIBC and RBC have quite a lot in common. As major banks, there are very few differences between them. Both banks offer the same products and usually offer the same conditions, interest rates, and fees on their accounts.

Below, we’ll take a closer look at RBC and CIBC, comparing what they have to offer Canadians in chequing accounts, savings accounts, and credit cards.

RBC and CIBC are two of the world’s largest banks, meaning they have many products to offer.

Below, we’ll take a look at their most popular and effective personal finance products.

Any bank or credit union offers chequing account options. They are, after all, staple products of personal finance and everyday banking.

CIBC and RBC are major banking corporations, which means they offer many different types of chequing account options with competitive sign-up bonuses.

CIBC offers major chequing accounts. Like many banks, it offers a discount, no-frills option, a medium tier with more flexibility, and a maximal chequing account option, suitable for people who have lots of banking needs. There are over a 1,000 CIBC branches across Canada.

RBC provides a similar range of chequing account options, all of which offer something to offer Canadians from all financial standings and offers 1,000 branches across Canada.

Some of the most popular RBC chequing accounts include:

Quite frankly, CIBC and RBC bring quite similar chequing account offerings to the table. That said, we'll have to say that both are near equal.

However, CIBC is likely to offer more discounted options, and that's why we're saying CIBC is the better choice for chequing accounts between the two major banking corporations.

CIBC and RBC both offer registered and non-registered account options. Unfortunately, most major banks in Canada do not offer the most competitive rates on these accounts. CIBC and RBC aren't any different.

Let's take a look at the registered and non-registered accounts offered by CIBC and RBC.

There are no minimum fees to open any of these accounts. However, the account holder must make a minimum deposit of $25 upon opening.

RBC offers a comparable set of savings accounts, with registered and non-registered options available to Canadians with no monthly fees.

Interest rates for all accounts start at 0.05%. There is, however, a promotional rate of 2% for all RBC savings accounts. Most of the savings accounts offered through RBC do not require a minimum deposit.

Both banks offer savings accounts that are nearly identical. However, RBC offers much more flexibility when compared. There is no minimum deposit to open most registered or non-registered accounts with RBC.

CIBC still offers an excellent roster of savings accounts. Their interest rates are the same as RBC’s. That said, if you anticipate opening an account with $25 or more, CIBC is still just as suitable.

CIBC and RBC both offer their fair share of credit cards, some of which find themselves among the best credit cards in Canada. Still, both banks are very similar in their offerings.

CIBC also offers credit cards for business owners and students, making their itinerary of credit cards suitable for all spenders.

Like CIBC, RBC also offers a wide selection of credit card options. The most popular ones include:

It probably goes without saying that there are many credit cards out there. With so many options, Canadians have their own specific needs, spending habits, and priorities, which is why credit cards from CIBC and RBC are tied.

If you’re torn between CIBC or RBC, the reality of the comparison is that both major banks are quite similar in their offerings and functionality.

Both banks charge higher fees and offer low interest on savings accounts. The consumer is paying for the overhead that comes with a major bank, such as branches and luxurious customer service options.

Whether you end up doing business with RBC or CIBC, you should probably choose the bank closer to places you frequent, such as your home, place of employment, or school.

If you find yourself rarely visiting branches and enjoy doing your banking online, perhaps you could benefit most from an online bank account. These accounts are usually free and offer some exceptional benefits to Canadian citizens.

Both CIBC and RBC offer a banking package for newcomers.

CIBC offers the CIBC Welcome to Canada Banking Package, while RBC offers the RBC Newcomer Advantage. Both accounts offer no monthly fees for a year.

The CIBC Welcome to Canada package offers free transactions and one year free on a safety deposit box.

Absolutely. Both CIBC and RBC are Schedule 1 banks in Canada, and protected by the Canada Deposit Insurance Corporation (CIDC). Insurance is included with each account at no cost.

While only you can answer this question, the truth is that CIBC and RBC charge for their services to cover the overhead costs of branches. If you never find yourself using a branch, you’ll likely find more value in using an often free online bank account. 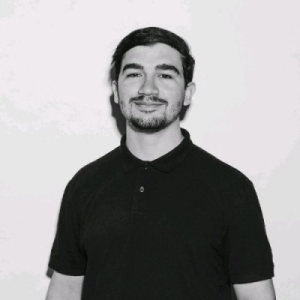 Zack Fenech is a finance writer and Wealth Rocket content manager. He is based in Toronto, Canada. Zack’s work has appeared on financial publications such as Ratehub.ca, MoneySense, and others. His areas of expertise include banking, investing, and personal finance. When he’s not thinking about banking, Zack spends his time making music, brewing beer, or working on his feature film script about a boiler-room troll.